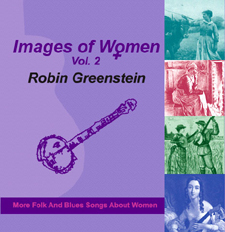 Q. What do Lorena & John Bobbitt, Frankie & Johnny, Newt Gingrich and Hillary Clinton, cross-dressing, sexual harrassment, unrequited love and women in the military have in common?

A. These topics and more are sung about in IMAGES OF WOMEN, an informative, entertaining exploration of views of women as expressed in traditional Anglo-American and Afro-American folksong. Robin surveys issues of love and fidelity, loyalty and desertion, subservience and independence in a wide variety of traditional and modern music sung and played on guitar and banjo.

This show can be performed as a full concert without the lecture component; or as a concert-lecture.

Robin is a veteran performer on the college market and has a broad background in music and folklore. She studied guitar, banjo and folklore at the Guitar Workshop in Roslyn, NY, later becoming a teacher at the same school. For two summers she attended Pinewoods Folk Music Camp, run by the English Country Song & Dance Society. Robin earned a B.A. in Music from SUNY-Stony Brook, studying for a year at Trinity College of Music and King's College in London. While at Stony Brook, she studied under and worked as an assistant to famed folk performer/musicology professor Hedy West (composer of "500 Miles") cataloguing and indexing her extensive collection of American folk music. Robin's thesis was on Women in Traditional British and American Folksong. She went on to be signed by Bob Dylan's publishing company as a songwriter, and later became a clinician for the world reknown Martin Guitar Company.

Combining her love of folk music with her interest in women's issues to create an entertaining, educational and enlightening experience, Robin has brought this program to campuses all over the country in many different formats: as a lecture, an in-class presentation, a noontime show, an evening concert.


Here's a link to a studio performance of "
Born In The Country" (from "Images of Women, Vol. II")

"As an Activities professional that strives to have programs that faculty recognize as viable components of the co-cirriculum experience, your program is extremely beneficial. Your presentation was well received by faculty, staff and students."
Union Director, Towson State University, MD

"You intelligently articulated both the historical significance and cultural implications of folk music with modern society."
Erik Bakken, Campus Minister, Univ. of MN-Morris

"Your performance was spectacular! Everyone enjoyed the combination of music and storytelling in the form of folklore. Not only was it entertaining, but interesting and informative as well."
Douglass College Annual Women's Conference '92, NJ

"Like good poetry, your music both pleases and instructs: I learned something new...and was treated to a revival of some of my favorite folk ballads sung with spirit and loving respect."
Dr. Karen Elias, Asst. Prof, English, Lock Haven Univ., PA

"Your performance was a wonderful opening for Women's History Month. The mix of pop and folk music was informative, interactive, entertaining and most of all FUN!"
Jennifer Reyes, Women's Center Coordinator, Fairleigh Dickinson University, NJ

Images of Women is a lively program which can be co-sponsored between Student Activities, Women's Centers and Women's Studies Departments.

Some of the institutions where Robin has performed this show:

To hear music from this program, visit the sound clips page