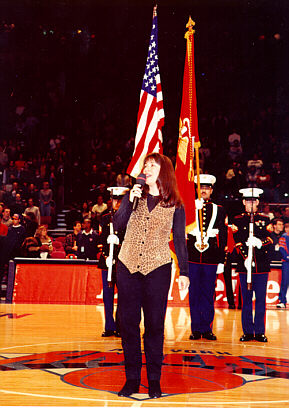 The thrill of 1996 for me was being asked to sing the National Anthem at Madison Square Garden before the NY Knicks vs. LA Clippers Basketball game.
I am a BIG Knicks fan, and after going to many games and seeing what I thought were uninspired singers, I contacted MSG, told them I was a professional singer (and a season ticket holder) and asked them if I could audition. They were very taken with the fact that a season ticket holder would want to audition,and asked me to send in an audition tape (containing just the anthem, accapella, no "fancy stuff"). I sent in my tape and started schmoozing up the guy in charge, Gary. When I saw people like Tony Bennet and Andrea McArdle singing the anthem for the start of this season. I thought "hmm.... no way they'll pick me." The very next day after Tony Bennett sang, I got the call from Gary - could I sing in December? It was the night of a family party so I hesitated for a minute, but hey, priorities are priorities! 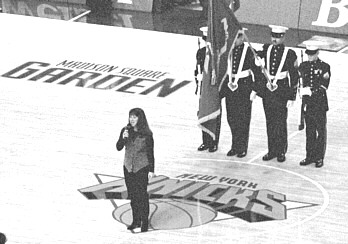 I was allowed to bring a guest, which was my sister (and her kids). We got to watch the players work out while I did a soundcheck (it's pretty funny to be singing "Oh say can you see" while John Wallace is dribbing behind your back...). They gave us dinner in the press room - me and all the sportswriters! Game time came and to be on the floor with the big guys was.....well it was incredible. Webmeister John Tuer came and snapped some photos from high up (the black and white photo) and MSG later sent me their up-close, from the floor (color version), both displayed for y'all to see. As I said to Gary after it was all over, "I hope this is the beginning of a beautiful friendship...." As if this wasn't enough, they gave me great seats for the game and also paid me. All in all a most memorable evening. Oh yeah, one more thing. They won!